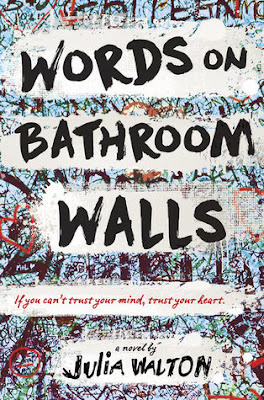 Fans of More Happy Than Not, The Perks of Being a Wallflower, and It’s Kind of a Funny Story will cheer for Adam as he struggles with schizophrenia in this brilliantly honest and unexpectedly funny debut.

Adam has just been diagnosed with schizophrenia. He sees and hears people who aren’t there: Rebecca, a beautiful girl who understands him; the Mob Boss, who harasses him; and Jason, the naked guy who’s unfailingly polite. It should be easy to separate the real from the not real, but Adam can't.

Still, there’s hope. As Adam starts fresh at a new school, he begins a drug trial that helps him ignore his visions. Suddenly everything seems possible, even love. When he meets Maya, a fiercely intelligent girl, he desperately wants to be the great guy that she thinks he is. But then the miracle drug begins to fail, and Adam will do anything to keep Maya from discovering his secret.

As a psychology major, I'm always fascinated with YA books that feature mental illness, which is why I immediately requested this one when I saw the synopsis, and this book did not disappoint. However, I can only give this book 4 stars because it felt kind of flat and didn't really capture my emotions that way other books did.

"I mean that cancer patients don't frighten anyone. When you have cancer, people are sympathetic. Thy feel something for you and people even hold races to raise money for your cure. It's different when people are afraid of what you've got, because then you get some of the sympathy but none of the support. They don't wish you ill, they just want you as far away from them as possible.
Cancer Kid has the Make-A-Wish Foundation because Cancer Kid will eventually die, and that's sad. Schizophrenia Kid will also eventually die, but before he does, he will be overmedicated with a plethora of drugs, he will alienate everyone he's ever cared about, and he will most likely wind up on the street, living with a car that will eat him when he dies. That is also sad, but nobody gives him a wish because he isn't actively dying. It is abundantly clear that we only care about sick people who are dying tragic, time-sensitive deaths."


Words on Bathroom Walls centers on Adam, who was recently diagnosed with schizophrenia, and thereafter was sent to another school because of the bullying from his previous school. As a result, he kept his condition a secret from his classmates in this new school while he is undergoing this new drug trial. In this new school, he meets Maya, whom he slowly falls in love with. However, the threat of a bully is still present.

"Respect your elders, when shouldn't it be, respect everyone?"


Words on Bathroom Walls, in my opinion, did a good job at portraying what schizophrenia is. I'm not an expert on the subject, but based on what I know the portrayal is pretty accurate. Adam was only able to distinguish visions from reality upon starting medication. Moreover, although he knows they're only visions, they still feel real to him. I think that's really what schizophrenia is like.

"I'm not asking for fair, nobody gets fair. And who says it's up to you to decide what I can handle?"


I think my favorite character in this book is the step-father. Many would think that Maya is a great character for understanding and supporting Adam all the way through, and I think that she's great, but I think the step-father is the best character. He sort of just lingers there most of the time, not exactly knowing how to interact with Adam, but you know that deep down he loves the kid. He may not always show it, most likely because he doesn't know how to, but he's definitely there ready to defend Adam when it matters the most.

"They contradict each other, like everything else in life, I guess. You'll hear one thing that gives you hope and another thing that takes it away. Be who you are. But not that. anything but that."


Overall, the book was a good one, I just didn't connect to it in an emotional way. I absolutely love the portrayal of both schizophrenia and family in this novel, and I recommend this to anyone who would want to delve into the mind of someone with schizophrenia for a few hours to know what it feels like.